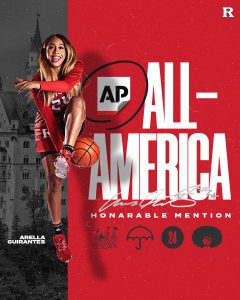 Guirantes is the first repeat All-American from Rutgers since 2006

Thirty-five elite women’s basketball players from around the country are listed in the AP All-America awards – five each on the First, Second and Third Teams and 20 receiving Honorable Mention.

Guirantes, named First Team All-Big Ten and to the Big Ten All-Defensive Team this season, is also one of five national finalists for the Ann Meyers Drysdale Shooting Guard Award, and is a top candidate for the Wade and Naismith Trophies for National Player of the Year and the Naismith Defensive Player of the Year award. She was selected as a Top 10 finalist for the Senior CLASS Award bestowed for excellence in classroom, community, character and competition.

The Bellport, N.Y. native claimed an ESPN National Player of the Week honor, two Big Ten Player of the Week accolades and two Big Ten Honor Roll nods, while becoming just the third player in Rutgers history to record a triple-double in a game. She ranks 25th in the nation in scoring (20.6 points per game) with a trio of 30-plus-point performances against then-No. 14 Maryland, Iowa, who was receiving votes in the national polls, and at Purdue. Guirantes is the only player in the Big Ten to rank in the Top 5 in each of the points, assists, steals and blocks per game categories.

After setting a new program record for free throws made in a season with 171 last year, she is challenging the school mark for free throw percentage for a single season. Guirantes is .892 on the year (91-102), just behind the program-best grade of .901 set by Tomora Young during the 1997-98 season.

The Bellport, New York native has done consistent damage against some of the nation’s top teams. She averaged 22.6 points per game in six contests against teams ranked in the NET Top 50.