The Anderson University athletics department and Athletic Director Marcie Taylor have named Jon Gin as the head women’s basketball coach, which was announced on Friday. 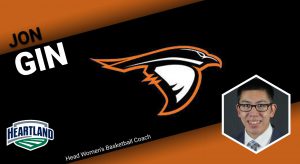 “I’m excited to bring Coach Jon Gin on board to lead the women’s basketball program,” Taylor said. “Coach Gin’s prior coaching and recruiting experience and work at institutions similar in ethos to AU coupled with the strong desire to mentor student-athletes in their faith development and a commitment to academic achievement make him uniquely qualified to build upon the solid foundation already in place.”

While at Covenant, Gin led the Covenant defense while also largely contributing to Covenant’s recruiting and development. During the 2019-20 season, the Scots limited opponents to 55.7 points per game during the conference season, which ranked fourth in the 16-team USA South Athletic Conference. Gin recruited and coached a three-time USA South Freshman of the Week. He also coached the first two All-West players in program history.

In addition to his responsibilities as an assistant coach, Gin led Covenant’s JV team and was in charge of all aspects of the JV team, including scheduling, budgeting, player growth and player development. Gin also filled the roles of Director of Intramurals and Home Events Coordinator.

Gin spent the previous three seasons at Gannon, where he served as the team’s recruiting coordinator and defensive coordinator. During the 2018-19 season, the Golden Knights ranked first in defensive rebounds per game, second in defensive efficiency and fifth in scoring defense in the 17-team Pennsylvania State Athletic Conference (PSAC). Gin recruited and coached Tori Obenrader, the 2019 PSAC Western Division Freshman of the Year and seven-time PSAC Western Division Freshman of the Week. The Golden Knights received four all-PSAC selections during Gin’s tenure.

“I want to thank Marcie Taylor and President Pistole for this incredible opportunity,” Gin said. “I’m honored to be joining the Anderson Community and I’m excited to get to work with our women’s basketball team! Go Ravens!”

As a student at NCAA Division I’s University of North Florida, Gin contributed to North Florida’s basketball operations and video coordination. Gin spent the 2015-16 season as an assistant at Moravian Prep Academy in Hudson, N.C. He has also coordinated a Florida State University women’s basketball camp event and worked as a YMCA basketball instructor.

Anderson University is on a mission to educate students for lives of faith and service, offering more than 60 undergraduate majors, 30 three-year degrees, 20 NCAA Division III intercollegiate sports, alongside adult and graduate programs. The private, liberal arts institution is fully accredited and recognized among top colleges for its business, computer science, cybersecurity, dance, engineering, nursing, and teacher education programs. Anderson University was established in 1917 in Anderson, Indiana, by the Church of God.