Michigan State ignited a 16-3 run over the first seven minutes of the second half and opened up a 57-37 lead over Maryland in a quarterfinal matchup. The Spartans held on for a 76-72 win in Gainbridge Fieldhouse Thursday evening.
Maryland intensified their defense and chipped away at the margin, cutting the lead to nine with 5:39 left in regulation on a layup by Hakim Hart. 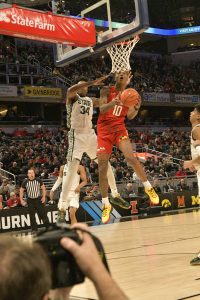 Photo by: Tony Harper, Excel H Sports/Indiana Sports Network
Then the Terrapins put on a full court press, and the Spartans looked lifeless.  SEVEN turnovers over the last 3-1/2 minutes of playing time allowed Maryland to cut the lead to two on an old fashioned three-point play by Terrapin star Fats Russell with 1:06 left.
Michigan State’s final turnover – when Malik Hill threw the ball off the hands of a teammate on a baseline inbounds play with 16 seconds left – allowed Maryland to call a timeout and set up a possible game winning play.
They got the ball to Russell, whose three from the top of the key was just off with 12 seconds left. Michigan State rebounded and Max Cristie was fouled and made both free throws to give the Spartans the four-point win.
Michigan State was still shooting well over 50% from the field for the first 27 minutes of the game – including an even better percentage from three-point range. After they notched that 20-point margin, Sparty went cold from the field for most of the remainder of the game.
The Spartans finished the last 13 minutes of the game shooting 4-13 from the field (including one of five from outside the arc), and ten turnovers.
Michigan State began the game shooting well, and then continued to shoot the ball well into the second hslf. The Spartans hit two of their three 3-point shots before the first media timeout and led 13-7. Those 13 points were scored by five different players. A minute after the teams resumed action, a sixth Spartan scored to give them a 15-7 margin.
By the second media timeout though, Maryland had pulled to within one, 18-17 with 11:22 left in the first half. 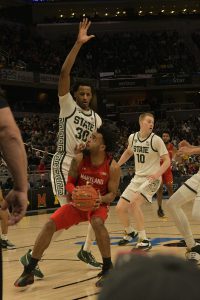 Photo by: Tony Harper, Excel H Sports/Indiana Sports Network
Michigan State came out of that timeout and scored the next seven points, and took control of the game from there, eventually building the twenty-point margin with 13 minutes left in the game.
The Spartans (21-11) had very balanced scoring as six players recorded eight points or more in the game. Cristie led them with 16 followed by Gabe Brown with 13. The Spartans shot 50% from the field for the game (27-54) including 9-19 from 3-point range and hit their free throws down the stretch.
Maryland closes out their season – a tumultuous one that saw their coach leave mid-season – at 15-17. Russell was a catalyst against the Spartans and had 20. Eric Ayala added 17, Donna Scott had 16, and Hart 11. 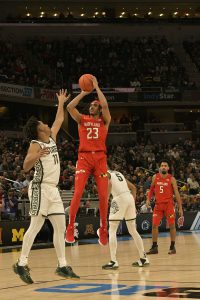