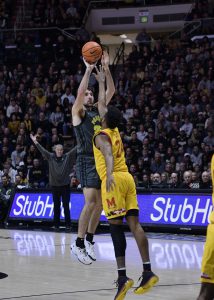 Salt, you might wonder why I chose salt as a descriptor of Ethan Morton’s over-all play, but let’s look at the definition of the word salt.

An adverb of salt is to preserve and that is exactly what Morton did on this snowy, January 22nd, 2023, day, but we will get back to that later in the story.

The first half saw the Boilermakers run out to a twenty-four to nine early first half lead, as the Terrapins came out the chute slow. A tendency Maryland has more often than not, displayed this season.

Zach Edey was once again, a major factor in the early lead as he scored at will, yes, being guarded by three Terps, as he overpowered them near the rim.

Both Purdue and Maryland never could find the range from long range, as they combined for a five of 34 attempts for the game; though both, kept firing away.

The second half saw poor Boilermaker choices, which led to a sprint out baskets by Jahmir Young, a grad student from Upper Marlboro, Maryland and the steady play of Baltimore, Maryland sophomore, Julian Reese, which saw Maryland cut the Boilers lead to below double digits. 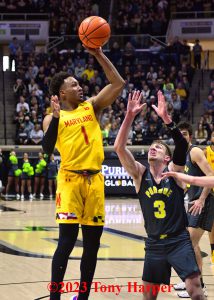 This was setting up as a trend as the Boilers became sluggish, complete with bad passes and troubles moving the ball pass the center line.

Then again, and again, Morton, would break up a Maryland pass, make a key rebound from a Terps shot and yes, block two shots, bring the ball up the court and stop virtually every run Maryland made in the second half. Maryland would cut the lead to three but then Morton would come to the rescue and yes, preserve (Salt) the lead for the Boilers while Edey continued his laser like domination in the offensive paint.

Maryland was relentless in the second half as they outscored Purdue in Mackey Arena in front of loud sold-out crowd, 34 to 23 points. 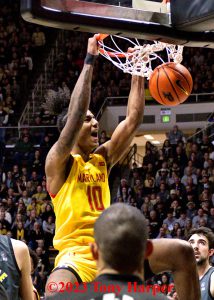 Zach Edey was dominant again as he scored 24 points on ten of seventeen shots and pulled in 16 rebounds, that included seven vital offensive rebounds. 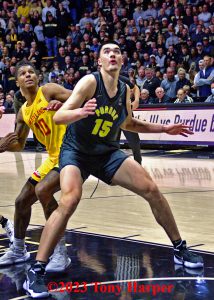 Another Boiler of notice was the defense of David Jenkins, Jr. who recorded two key rebounds and scored three points in his twelve minutes of floor time.

No other Boiler managed to score double figures.

Maryland was led by Reese’s 19 while Hakim Hart added 11 and Young scored ten.