WEST LAFAYETTE, Ind. – Following a big game against No. 21-ranked Minnesota on Saturday, Brandon Newman was named the Big Ten’s Freshman of the Week, the league office announced Monday. 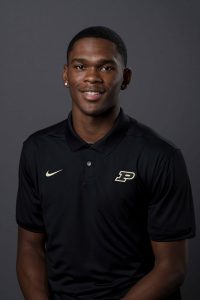 The 6-foot, 5-inch guard from Valparaiso, Indiana, scored a career-high 29 points with six rebounds and two steals in Purdue’s 81-62 win over the Golden Gophers. He was 9-of-14 from the field, 5-of-6 from 3-point range and 6-of-6 from the free throw line.

Since the 2010-11 season, only eight players from the Big Ten Conference have scored 29 points with six rebounds, six made free throws and five made 3-pointers. However, Newman is the only player to reach those marks as a freshman (Illinois’ Brandon Paul and Malcolm Hill, Iowa’s Peter Jok twice, Michigan’s Caris LeVert, Michigan State’s Denzel Valentine, Penn State’s Talor Battle and Purdue’s Carsen Edwards and Brandon Newman).

The Boilermakers will travel to Maryland for a 6:30 p.m. ET, tip on Tuesday on the Big Ten Network