BOILERMAKERS FALL TO No. 18/20 OHIO STATE IN BIG TEN OPENER

Madison Layden paced the Boilermakers with 13 points and a trio of 3-pointers. Abbey Ellis jumped back into double figures with an 11-point outing. In addition to Layden and Ellis both making five shots, only Ra Shaya Kyle and Jeanae Terry made more than one field goal. 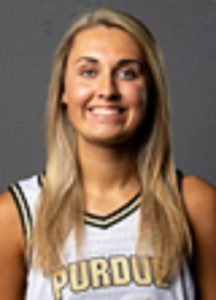 Purdue’s defense forced 22 Ohio State turnovers on the night but only converted them into 14 points, compared to 18 points on 16 Boilermaker giveaways. Jeanae Terry notched a season-high 13 rebounds, including four on the offensive end, as Purdue hauled down 13 offensive boards.

The Boilermakers got good looks in the first half but struggled to convert, shooting just 26%. Purdue knocked down just a trio of triples on 17 first half attempts. Despite the cool shooting, Purdue kept the turnovers to just eight in the opening 20 minutes and forced 14 Ohio State giveaways.

Ellis, Layden and Cassidy Hardin each sunk a 3-pointer over the opening 20 minutes, as the Boilermakers took 14 more shots. Defensively, Purdue limited the Buckeyes to their lowest first-half score of the season at 24, including a season-low seven points in the second quarter. Purdue trailed by two at the break.

A slow start to the third saw Ohio State build up a 10-point advantage. Purdue closed the third on a 7-2 run with a buzzer beater by Kyle to pull the Boilermakers within five going into the fourth. The Buckeyes took advantage of just four Purdue points in the first six minutes of the final frame to grow the gap to 17.

Purdue’s press came to life late in the fourth to give Purdue nine straight points and trim Ohio State’s lead to eight. The Buckeyes finished the game on a 9-0 run, as Purdue missed its final nine shots in an attempt to mount a comeback.

QUOTE
Head coach Katie Gearlds …
I think the biggest thing for us is competing all 40 minutes. I think we had an opportunity to cut it down the stretch. That’s the biggest thing you want to take away from our team is that we’ll compete for 40 minutes. We took 21 more shots than they did. We guarded our tails off. In the second half, our frustration showed. We tell them that no matter what we do on the offensive end, we have to lock in defensively.

NOTES
• The Boilermakers are now 31-49 all-time against the Buckeyes.
• Purdue’s 36 3-point attempts surpassed the school record of 33 set against Florida State earlier this season.
• The Boilermakers snagged 10 or more offensive rebounds for the fourth time this season.
• Purdue finished with fewer than seven 3-pointers for the third time this year.
• Purdue’s nine assists were a season low, with eight coming from Ellis, Terry and Layden.
• Kyle, Terry, Layden and Ellis went a combined 16-of-42 from the field (38.1%), while the rest of the roster was 5-for-29 (17.2%)
• Terry hit double figures in rebounding for the eighth time in her career and first as a Boilermaker.
• The Boilermakers were outscored 25-13 in the fourth quarter.
• With her lone triple on the afternoon, Hardin reached the century mark for career 3-pointers.
• Layden set a new career high with a pair of blocks.

UP NEXT
The Boilermakers will hit the road for the first time in the Big Ten this season with a trip to No. 8 Maryland on Wednesday night. Tipoff is set for 7 p.m.

The Buckeyes beat Purdue on the road by a 70-53 margin.

Ohio State opened scoring on the first possession on a layup from Kateri Poole. The Buckeyes scored the first six points of the game as Purdue began 0-of-5, but the Boilermakers tied the game at six and took an 8-6 lead midway through the opening quarter. OSU held a one-point lead, 11-10, at the media timeout with 3:23 to play. A Purdue triple brought them within one before the Buckeye defense locked down and didn’t allow a point in the final two minutes. OSU led 17-13 after 10 minutes of play.

The Boilermakers took its first lead of the game with the first seven points of the second quarter, 20-17. Poole got OSU on the board at the free-throw line to begin a 7-0 run for the Buckeyes as Ohio State reclaimed a 24-20 lead with four minutes to play in the half and took the 24-22 advantage into the locker room.

The Buckeyes began the second half with the first eight points on the floor to extend the lead to double figures for the first time of the game, 32-22. Taylor Mikesell had a pair of baskets to offset Purdue’s first scoring of the second half as Ohio State led by a 40-33 margin midway through the quarter. The Buckeyes took a 45-40 lead into the fourth quarter.

OSU began the final quarter with a pair of quick baskets from Rikki Harris and Rebeka Mikulášiková and stretched the lead to 52-42 with 7:23 remaining. Purdue called timeout with 6:26 to play as OSU led 54-44. The Buckeyes put together an 8-0 run heading into the media timeout with a 60-44 lead. Purdue responded with seven-straight points to cut the Ohio State lead to 61-51 with 3:13 remaining. The Boilermakers scored next to cut the Buckeye lead to single digits, but six OSU free throws closed out scoring to cap a 70-53 victory.

On the message to the team at halftime:

“In general in the first half, we didn’t move the ball side-to-side and we took really quick shots. We didn’t make Purdue defend at all and we took a lot of tough, contested shots or turned the ball over. In the second half, I thought we moved the ball a lot better, which allowed us to get better opportunities.”

On being more aggressive this game:

“I had a conversation with Coach Carla [Morrow] about my playing. I think at the beginning of the season I was just trying to figure out my role this year – I feel like it’s changed every year I’ve been here. When I talked with Coach Carla, that’s what she wanted and expected from me, to be more aggressive, shoot, get to the basket, so I made sure to get back to that. I feel like that’s who I am as well, but I’m always willing to do whatever for the team to succeed.”

On Ohio State’s rebounding against Purdue and the adjustments made:

“We have to rebound by committee since we’re a little smaller so I think [Purdue] was really hot in the first half and we gave them a lot of offensive-board opportunities, which led to more points in the paint for them and we really wanted to cut back on those coming out of halftime. That was a focus for us to hit somebody and box out when the shot goes up and I think we all did a really good job of holding our box outs.”

Ohio State is back at home on Tuesday evening to host Mount St. Mary’s for a 7 p.m. tip. The game will be broadcast live on B1G+ and AM 1460.