In the opening game of the NCAA Indianapolis first round, the Michigan Wolverines pounded the ball in the paint and outscored a very good Colorado State Ram team 34 to 16.

Four Wolverines were in double figures led by Dickinson’s 21 while Brooks would add 16 followed by Frankie Collins14 and Caleb Houstan’s 13. Diabate would add nine to his team high rebound total. 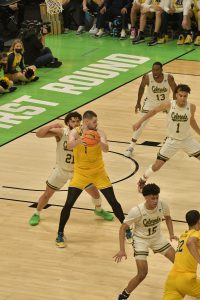 Both teams would go through severe droughts, with each team enduring sometimes over three minutes a piece.

The best scoring runs were Michigan’s eight in the second half and Colorado State’s ten in the first half.

The Rams were led by Dischon Thomas’ 15 followed by David Roddys’ 13 and Kendle Moore with ten. 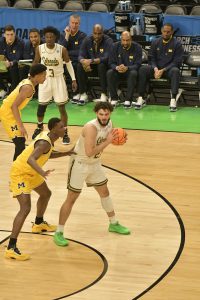 Colorado State would win the first half with a halftime lead of seven (36 to 29), Michigan would win the game with a 46 to 27 outburst.

Michigan moves on to take on the Tennessee/Linwood victor.