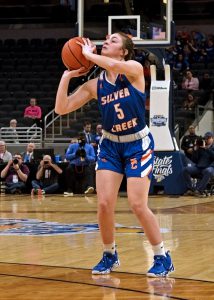 Photo by: Tony Harper/Indiana Sports Network
But this game was about the Panthers – runners-up last year to Silver Creek in this same game – stamping their claim to being in the discussion of all-time great teams in Indiana high school girls’ basketball.
6-3 Senior Mila Reynolds leads the Panthers in scoring most games (21.6ppg) and will take her talents to Top Ten program Maryland in the Fall. She had 21 points seven rebounds, and four assists in this game. Junior guard and Purdue commit Rashunda Jones had 17 points, six rebounds, and five assists and was very active early in the game setting the tone for the Panthers. 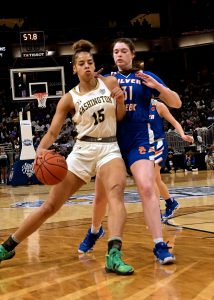 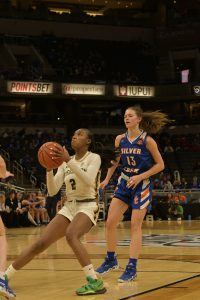 Photo by: Tony Harper/Indiana Sports Network
Amiyah – yes Reynolds – (also committed to join her older sister at Maryland after another year of high school) had 8 points, as did starting freshman guard Ryiah Wilson. Freshman Monique Mitchell came off the bench and scored 14 points in 11-1/2 minutes. 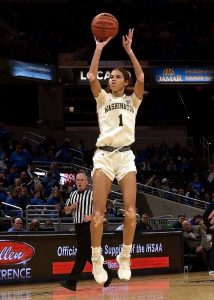 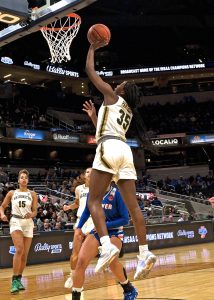 Photo by: Tony Harper/Indiana Sports Network
Now back to Kira, the 6-3 freshman.
Kira averages almost a Double-Double (10ppg and 9.5rpg). She had 8 points and 7 rebounds – in the first quarter. She no points and 3 boards in the second quarter while sister Mila scored a dozen.
The Panthers opened up the game with a 24-0 run to begin the 2nd quarter, taking a 19-10 lead after one to 43-10. That was part of a 27-0 run that spanned over six minutes of the first and second quarters.
In the third quarter Kira dominated the glass, collecting 10 boards and six points. She finished with four more rebounds in the 4th quarter to total 24 for the game to go with 17 points. The rebound total is an all-time record for a girls’ basketball state championship game in the 47-year history of girls’ basketball in the IHSAA. She eclipsed 1980 Miss Basketball Maria Stack of Columbus East, who had 22.
Silver Creek (26-3) was led by senior Kyndi Mason Striverson with ten. Classmate Lacey Tingle added 9 for the Dragons. 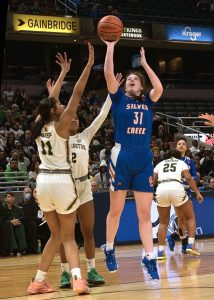 Photo by: Tony Harper/Indiana Sports Network
Both the Panthers and the Dragons move up to 4A next season due to Success Factor.