Williams Named to D3hoops.com Team of the Week 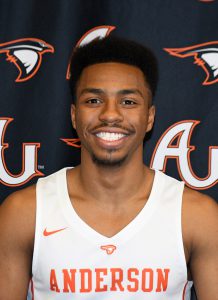 Williams helped guide the Ravens (3-1) to a 2-0 week after sweeping Manchester University (2-3). On Friday, Williams scored all of his 27 points in the second half for a new career high as Anderson locked up a 93-89 victory against the Spartans. The 5-foot-9 senior guard from Anderson also produced seven assists and eight rebounds.

The Ravens battle Defiance College (0-4) in two games this week. Anderson hosts the Yellow Jackets on Friday at 7 p.m. in O.C. Lewis Gymnasium. The Ravens then face off with Defiance on Saturday at 6 p.m. in Defiance, Ohio.