Hoosiers Pull Out Win Over Rutgers Behind Patberg’s 19

Indiana Women’s Basketball team used six- and five-point advantages in the first and third quarters respectively to pull out an opening round 66-54 B1G Tournament win in Gainbridge Fieldhouse in Indianapolis Thursday afternoon.

Ali Patberg nailed her second three at the horn to give the Hoosiers a 16-10 lead after ten minutes. Patberg was sharp all game and led the Hoosiers with 19 points. 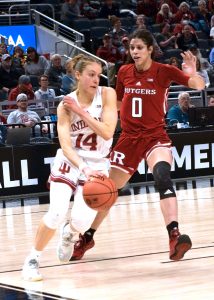 Photo by: Tony Harper/Indiana Sports Network/Excel H Sports
Rutgers and IU played to a draw in the second quarter as Shug Dickson had 8 at halftime and proved to be difficult for the Hoosier defense to keep out of the lane off the bounce. 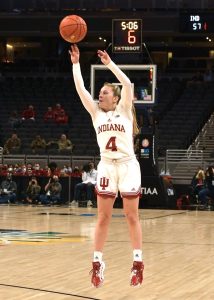 Photo by: Tony Harper/Indiana Sports Network/Excel H Sports
The Hoosiers broke the game open some in the third quarter taking an 11-point advantage with just under 2 minutes left in the frame.
Chloe Moore- McNeil hit a layup off a Patberg assist to put Indiana up 46-35 with 1:58 left in the quarter. That capped a 12-5 run for the Hoosiers and put them in control. IU never led by less than 8 the rest of the way in moving onto the next round.
Patberg’s 19 points were on 6-10 shooting (5-7 from three-point land), and she also dished out six assists. Grace Berger was an efficient 7-14 from the field and added 17 points and had six assists as well. 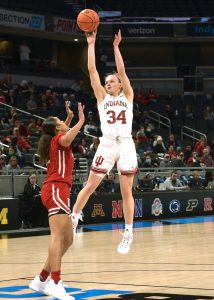 Photo by: Tony Harper/Indiana Sports Network/Excel H Sports
MacKenzie Holmes is working herself back into playing shape after knee surgery in January sidelined the Hoosiers leading scorer and rebounder for a few weeks. She had 11 points and five rebounds. 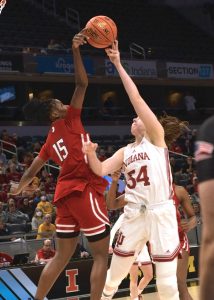 Photo by: Tony Harper/Indiana Sports Network/Excel H Sport
Osh Brown and Sayawni Lassiter had 12 each to lead the Scarlet Knights. Brown dominated the boards in the game with 10 as Rutgers outrebounded the Hoosiers 35-30. Dickson finished with those 8 points she had at halftime. 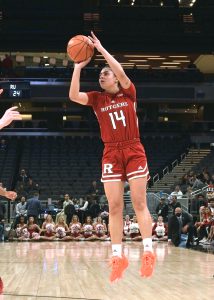