When you have two teams meet, that both have trouble closing out games, what happens?

Trevion Williams hit two of two free throws to put Purdue up 69-65 with 11 ticks left on the Mackey Arena clock. Eric Hunter Jr fouled Xavier Johnson with eight seconds left – planned foul – and Johnson hit both free throws to pull the Hoosiers back within two. Williams was then fouled but missed both.
Johnson got the ball and tried to shoot from half-court, but the shot was off. 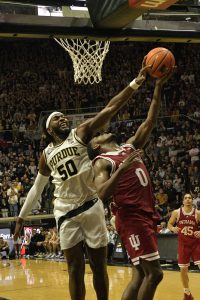 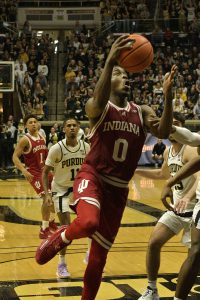 Photo by: Tony Harper/Indiana Sports Network/Excel H Sports
Purdue led by 13 points (33-20) on a Mason Gillis layup with 2:48 left in the opening 20 minutes of play. That margin evaporated to four at halftime due to sloppy play by the Boilers and good execution and shooting by Indiana.
The Hoosiers 9-0 run to end the half gave them some momentum heading to the second half, down just 33-29. 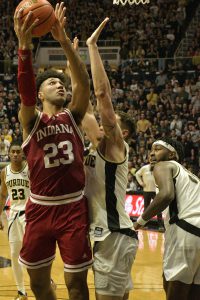 Photo by: Tony Harper/Indiana Sports Network/Excel H Sports
Purdue came out on fire to begin the second half with Zach Edey nailing a jumper in the lane followed shortly by a Mason Gillis three pointer to put the Boilers up 38-29. 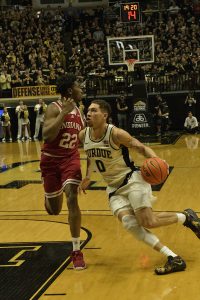 Photo by: Tony Harper/Indiana Sports Network/Excel H Sports
This game though belonged to senior guard Hunter, Jr who started the game hot, remained hot all the way throughout, and finished with a flashy stat line of 17 points, five rebounds, and five assists in 37 minutes of court time against Purdue’s archrival.
It was Senior Day in Mackey and all three of Purdue’s seniors contributed mightily to the 25th win of the season for the Gold and Black. Sasha Stefanovic added 15 points and hit several timely three’s and some free throws down the stretch. Williams had eight points and eight rebounds off the bench. 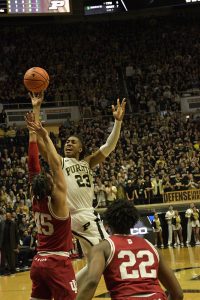 Photo by: Tony Harper/Indiana Sports Network/Excel H Sports
Zach Edey and Jaden Ivey – both sophomores – each had 10 and the 7-4 Canadian, Edey had 11 rebounds as well. Mason Gillis had seven points and seven rebounds and was his usual high motor self for 36 minutes.
Purdue’s bench – other than Williams  – struggled uncharacteristically to contribute. Caleb Furst, Isaiah Thompson, and Ethan Morton played 18 combined minutes and had two Furst made Free Throws as their point total. Morton and Thompson were both scoreless.
IU fought hard all game and had three in double figures, led by Xavier Johnson’s 18 points and 12 assists. Trace Jackson-Davis added a solid 15 points and six rebounds, while Miller Kopp had 14 points.
Both teams will be in Indianapolis this coming week for the B1G Conference Tournament in Gainbridge Fieldhouse which begins Wednesday.
Purdue (25-6, 15-6) will either be the 2nd or 3rd seed in that tournament and receive a double bye and won’t play until Friday. The Hoosiers finish the regular season at 18-12, 9-11 in the conference. They will be the ninth seed and play Thursday.